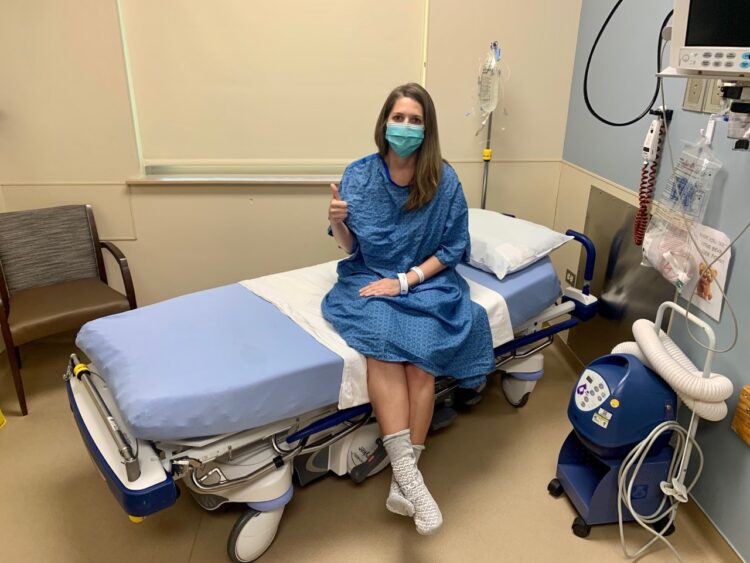 It’s barely been a year since we said goodbye to my dad after a hard-fought battle with leukemia. So, the word “cancer” from my doctor’s mouth was a shock when I first heard it last month.

My regular pap came back abnormal showing signs of likely malignancy and positive HPV. The HPV wasn’t completely unusual for me. It has shown up on my pap a couple times dating back to 2007 but never paired with anything more serious. Many women my age have dealt/deal with HPV. I share this not to be too personal, but because some things seem taboo but deserve serious discussion. The first HPV vaccine didn’t even get FDA approval until June 2006, when I was almost finished college. I first tested positive for it in 2007. Often, your body can fight off the virus but in some cases it leads to cervical cancer.

Even with the extensive cancer in my family (leukemia, colon, uteran), I hadn’t really heard much about cervical cancer. While I knew it was a possibility given my HPV, I know a lot of women who’ve tested positive for HPV and have not developed cervical cancer. To be honest, I never gave it a whole lot of thought.

Until that abnormal pap last month. My GYN, who thank God is VERY thorough, brought me in for a colposcopy (also not unusual for those who’ve dealt with HPV). But this time, she did a pretty invasive biopsy, not only of my cervix but the uterus as well. It was not a pleasant experience and from what my doctor could see with the scope, it did not look good. From there it was a waiting game for results which included several tearful and scary nights.

We got the call on a Saturday (yes, even on a Saturday my GYN called us since she was on delivery rounds at the hospital). I’ll say we were “lucky” the results actually came back a tad better than originally expected; the biopsy showed adenocarcinoma in-situ, in short “pre-cancer.” Adenocarcinoma develops in the glandular cells. It is the more rare type of cervical cancer.

Two weeks ago, we met with my GYN oncologist at Rocky Mountain Cancer Center for the first time. He reviewed the biopsy results and performed an exam where he could also see polyps on my cervix. He also got me scheduled for a more intensive biopsy called a “cone” which basically removes a cone-shaped piece of tissue from around the entire cervix. The results would determine whether the cancerous cells had become invasive and spread outside of the cervix. We had high hopes this would not be the case since my initial biopsy of the uterus had come back negative.

During that first meeting with the oncologist, we also had the serious discussion about options. Basically, we could go one of two routes. If we were certain we wanted to have kids, I could have a procedure to remove the current pre-cancerous cells and then we’d have to try getting pregnant right away with plans for hysterectomy after. However, this type of cervical cancer has a high rate of recurrence so we’d have to be willing to take that risk. Our other option: move forward with hysterectomy with the best chance of eliminating the cancer.

We chose hysterectomy. Given my family history and the pain I went through watching my dad suffer through 3 recurrences of his cancer, I couldn’t risk the chance of return. Is there still a chance it can come back? Yes. The oncologist recommends I still go for paps at least 2-3 times per year to get checked out. This seems daunting but early detection is the best chance of beating any type of cancer.

On Wednesday, I went in for the cone biopsy and the oncologist put a rush order on the pathology. The next day we were fortunate to learn it hadn’t spread, which meant robotic hysterectomy was an option for me. 48 hours later (yesterday), I went in for the surgery. The hysterectomy was an outpatient procedure, but having anesthesia twice in a two day period took its toll on me. My recovery at the hospital lasted about four hours instead of the predicted 1-2. But I was lucky to be able to go home and spend the day and night in my own bed recovering. This weekend will be more of the same: rest and recovery.

I’m sharing this story as a reminder to GO GET YOUR ANNUAL PAP! Some recommendations now call for paps every 2-3 years and insurance doesn’t want to cover it. Fight it. If you’ve ever tested for HPV in the past, absolutely do not skip a pap. We were so fortunate to have caught this early and I don’t even like to think about what would have happened if I’d skipped a year. There are often NO symptoms to this type of cervical cancer (such as in my case). We only found out through my pap.

I also hope we can be more open about HPV and the risks. Nowadays most kids are receiving the HPV vaccine. If you’re a parent that’s hesitant or considering opting your child out, please don’t. The vaccine drastically reduces the chances of cervical cancer.

I also wanted to share this as a reminder that not all women are able to have children and for those who can’t, getting asked about their plans for kids can be heartbreaking. We were able to make this choice on our own. But just because we know it’s best for us AND we didn’t even have any plans for a family, it doesn’t mean the decision was “easy.”

A HUGE thank you goes out to my care team: my extremely thorough gynecologist Dr. Stacey Hennesy, my talented oncologist Dr. Daniel Donato, and his whiz of an office administrator, Vickie, who navigated a variety of insurance battles for us. The nurses, OR staff, and anesthesiologists and Rose Medical Center are also amazing. And thank you to everyone who sent a text, card, food, whatever to cheer us up and make the last few weeks a little easier. We love and appreciate you!