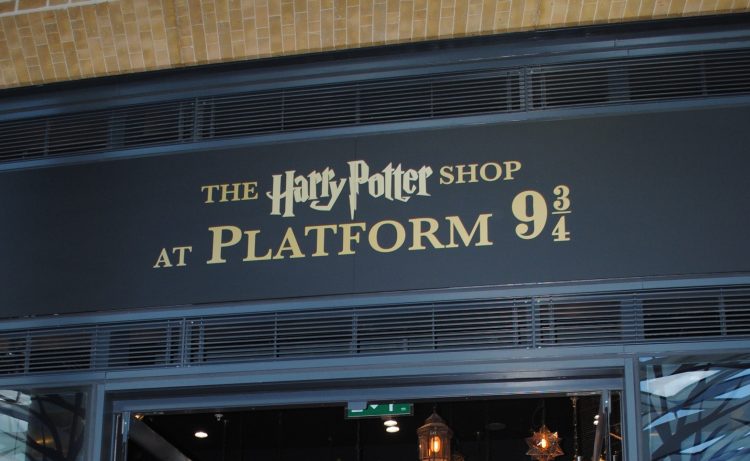 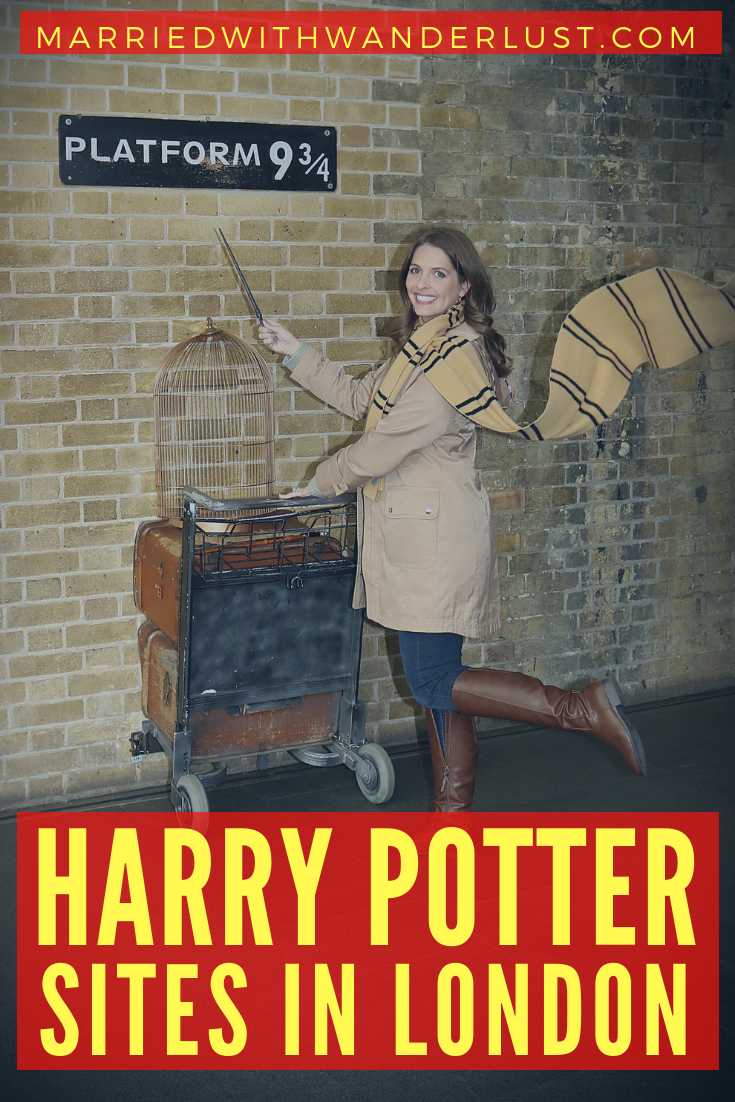 One thing you need to know about us: we not only love traveling, we love Harry Potter! In fact, our first visit together to London (also our honeymoon) was specifically to see Harry Potter and the Cursed Child on the West End. Our wedding bands are also engraved with a famous exchange between Snape and Dumbledore. His reads, “After all this time?” Mine: “Always.” And we’re both Hufflepuffs… you know, in case you were curious. If you love HP as much as us, you’ll want to check out our guide below for all of the best Harry Potter sites in London!

The iconic Hogwarts Express departs from London’s Kings Cross Station. The spot where you board the train is Platform 9 3/4, but the scenes were actually shot between platforms 4 and 5. 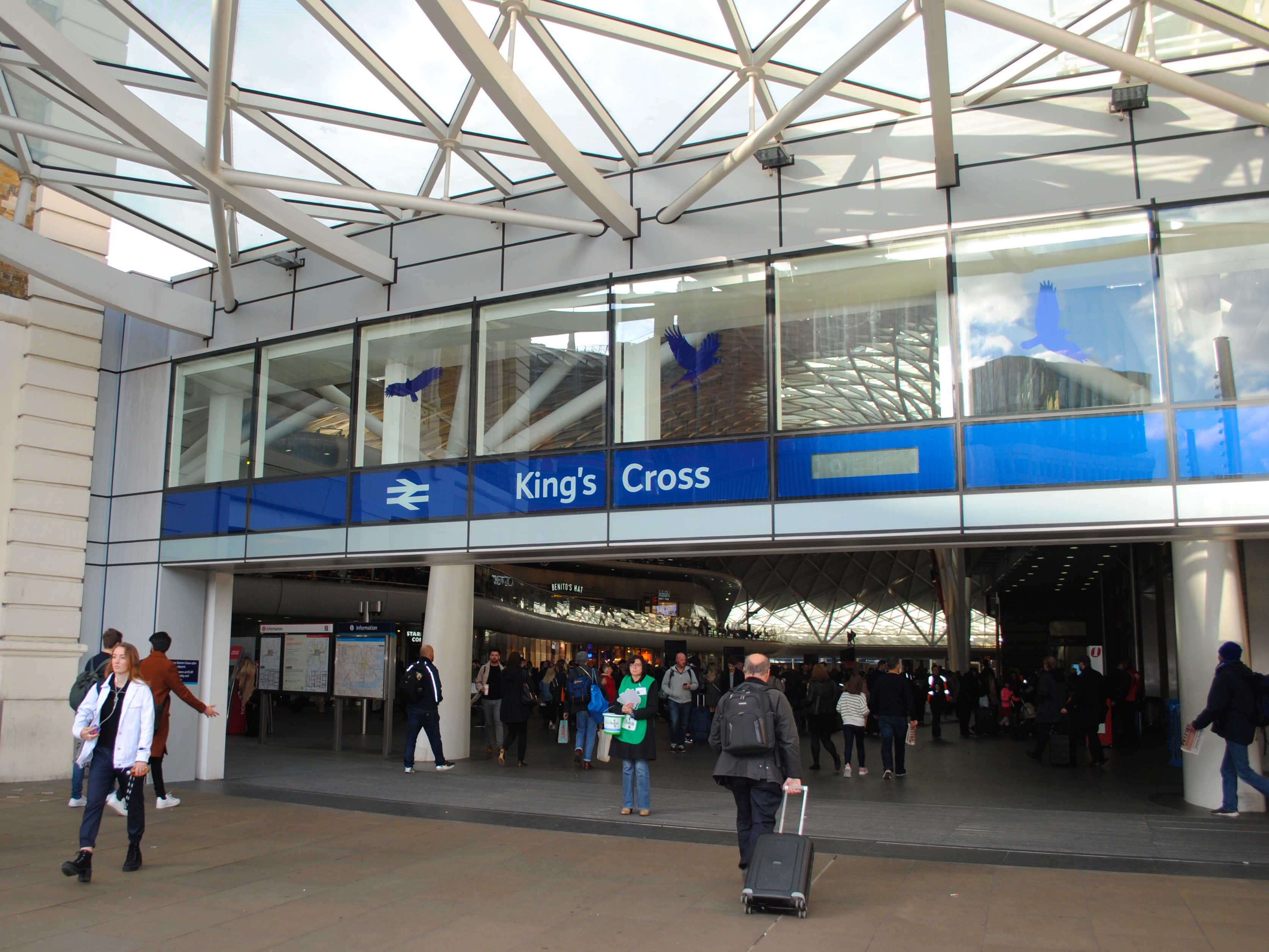 Muggles can also -in the words of Molly Weasley- walk straight at the wall between platforms 9 and 10. It’s best to do it at a bit of a run if you’re nervous. Thanks for the advice, Molly! 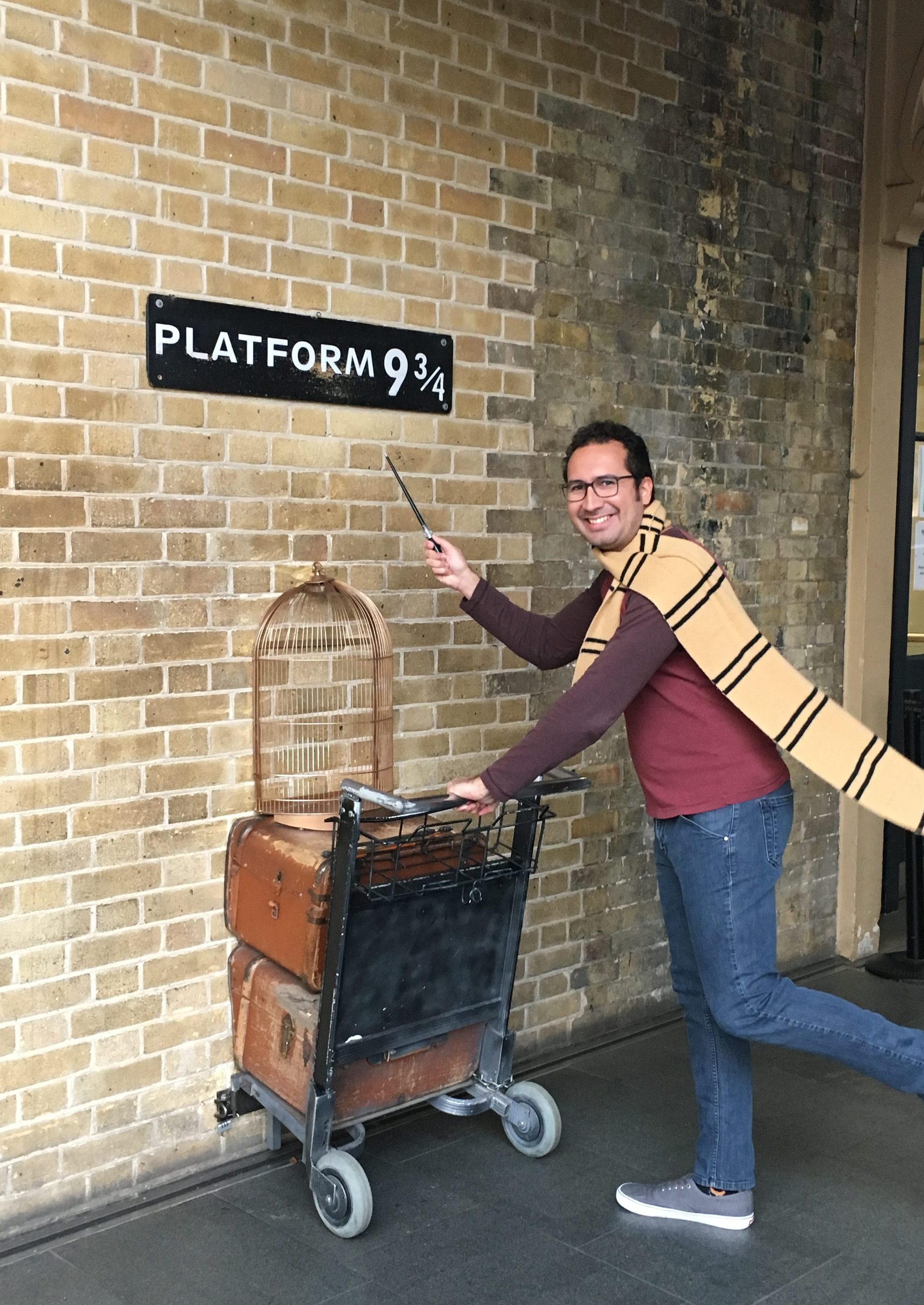 The Platform 9 3/4 photo opp is located between… platforms 9 and 10. Keep in mind that the line is long, but it’s worth the wait. Plus, it actually moves pretty quickly. 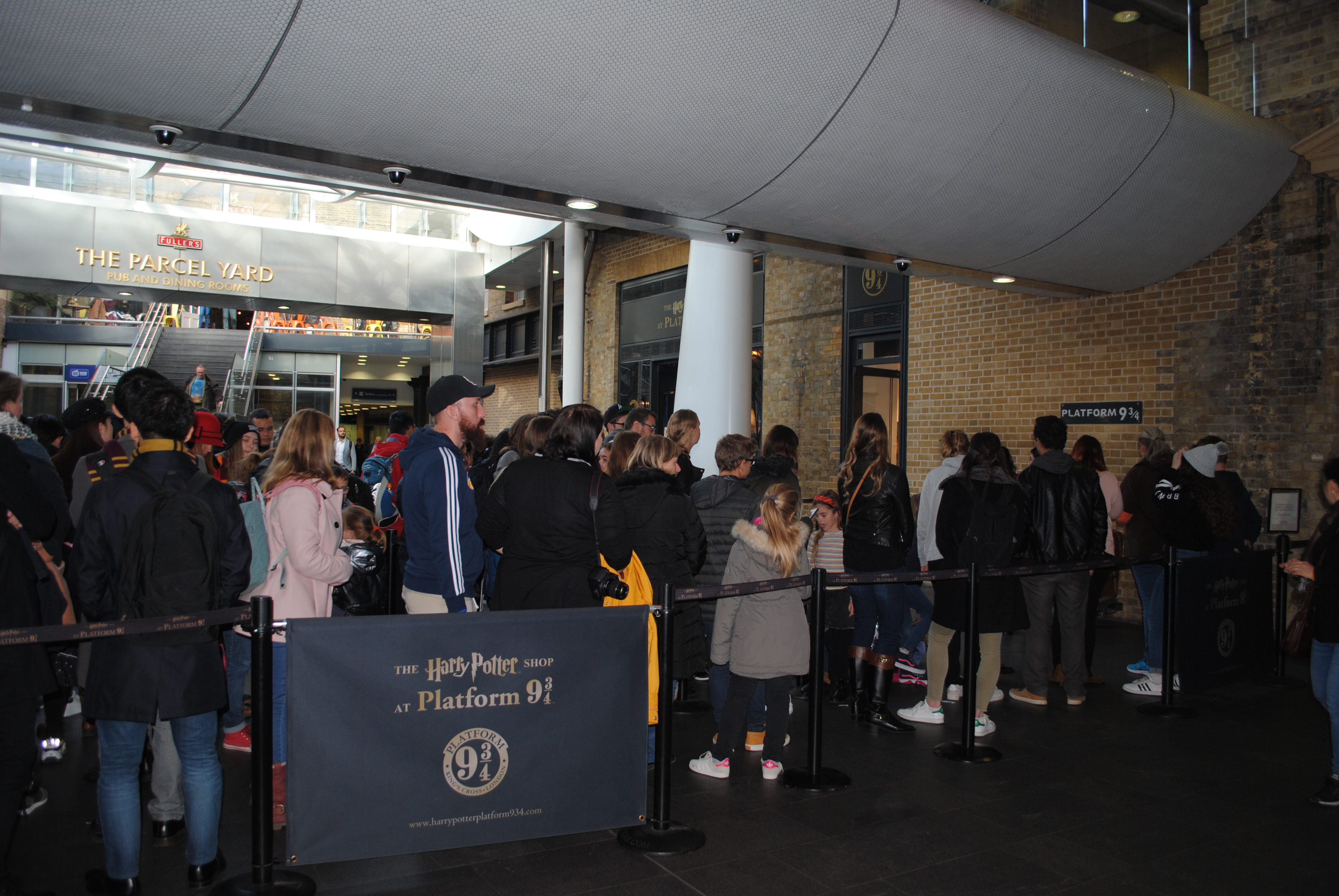 Once its your turn, you get to pick a House scarf and a wand. Then step up to the cart, raise your wand, and smile for the photo. Staff members will toss your scarf at just the perfect moment so that it looks like you’re in motion! (And, yes, you may notice that WC is wearing a Gryffindor scarf. There is only one of each available for the photo-opps, so bring your own if you’re planning on a group photo!) 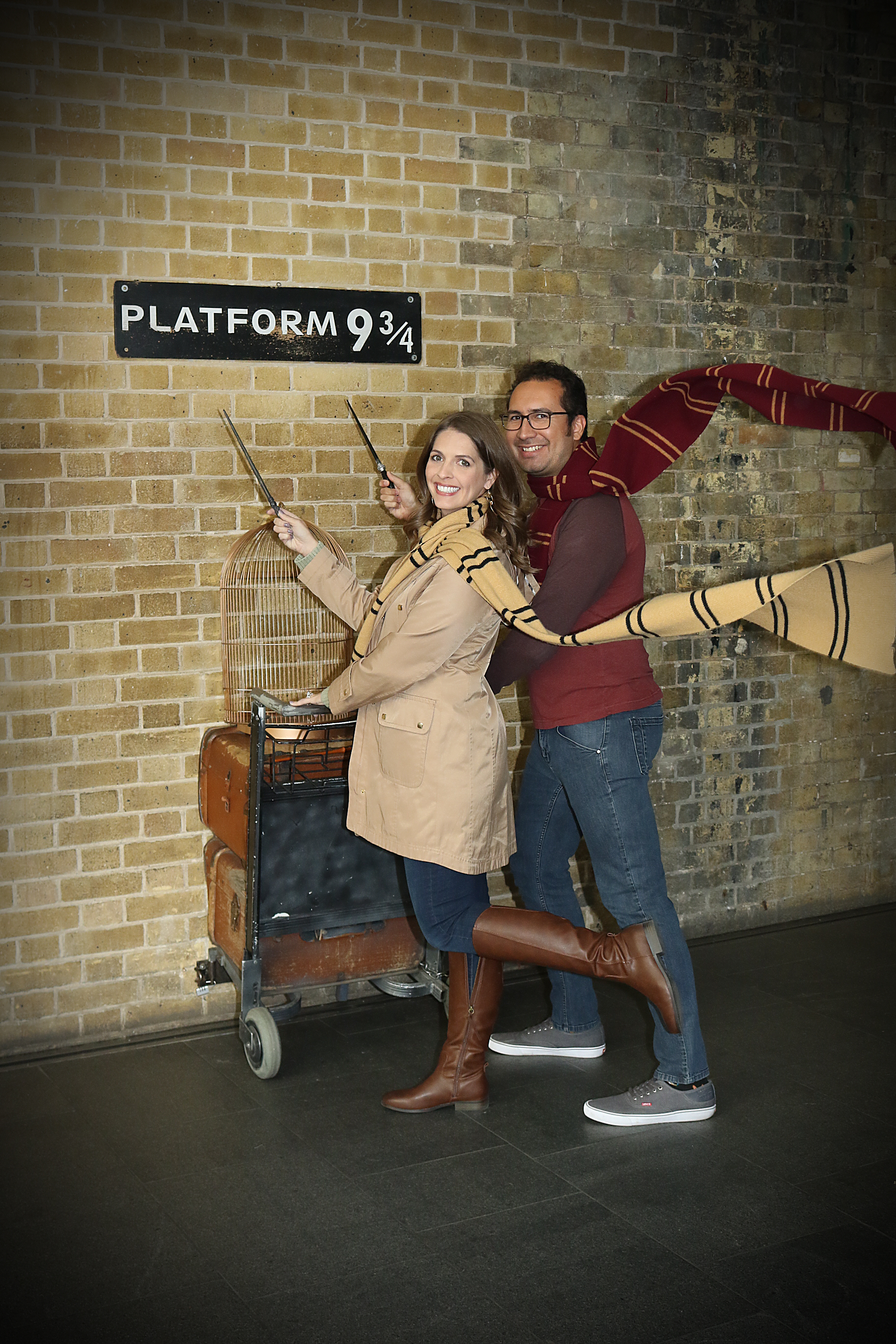 Once you’re done photo-opping, step into the Harry Potter shop (built to look like Olivander’s wand shop) and purchase your photo or another souvenir. The photos taken by the staff are actually not unreasonably priced (2 for £15). 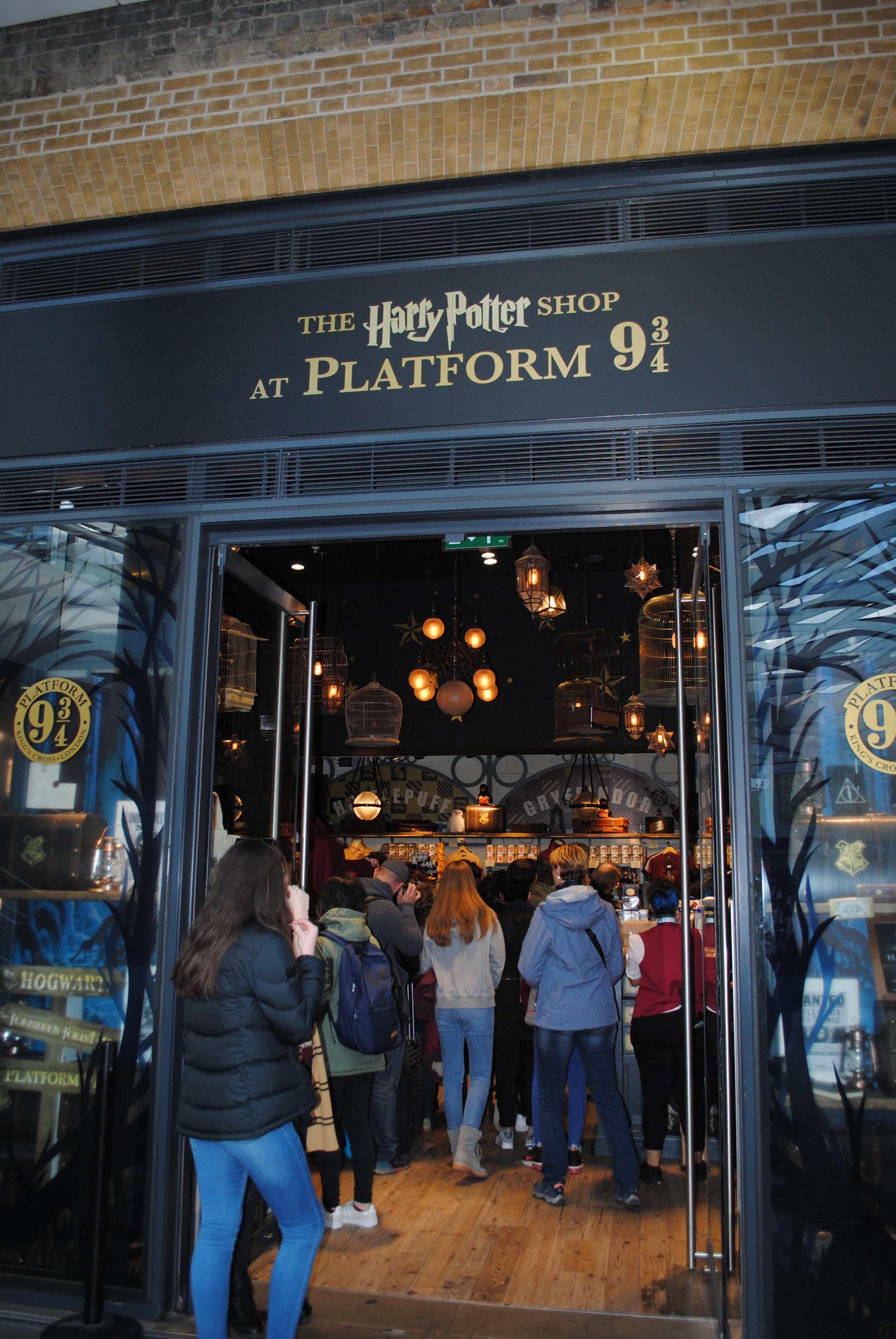 Though the actual Hogwarts Express film scene is inside Kings Cross Station, the exterior shots of the train station were shot just a few steps away at St. Pancras Station. 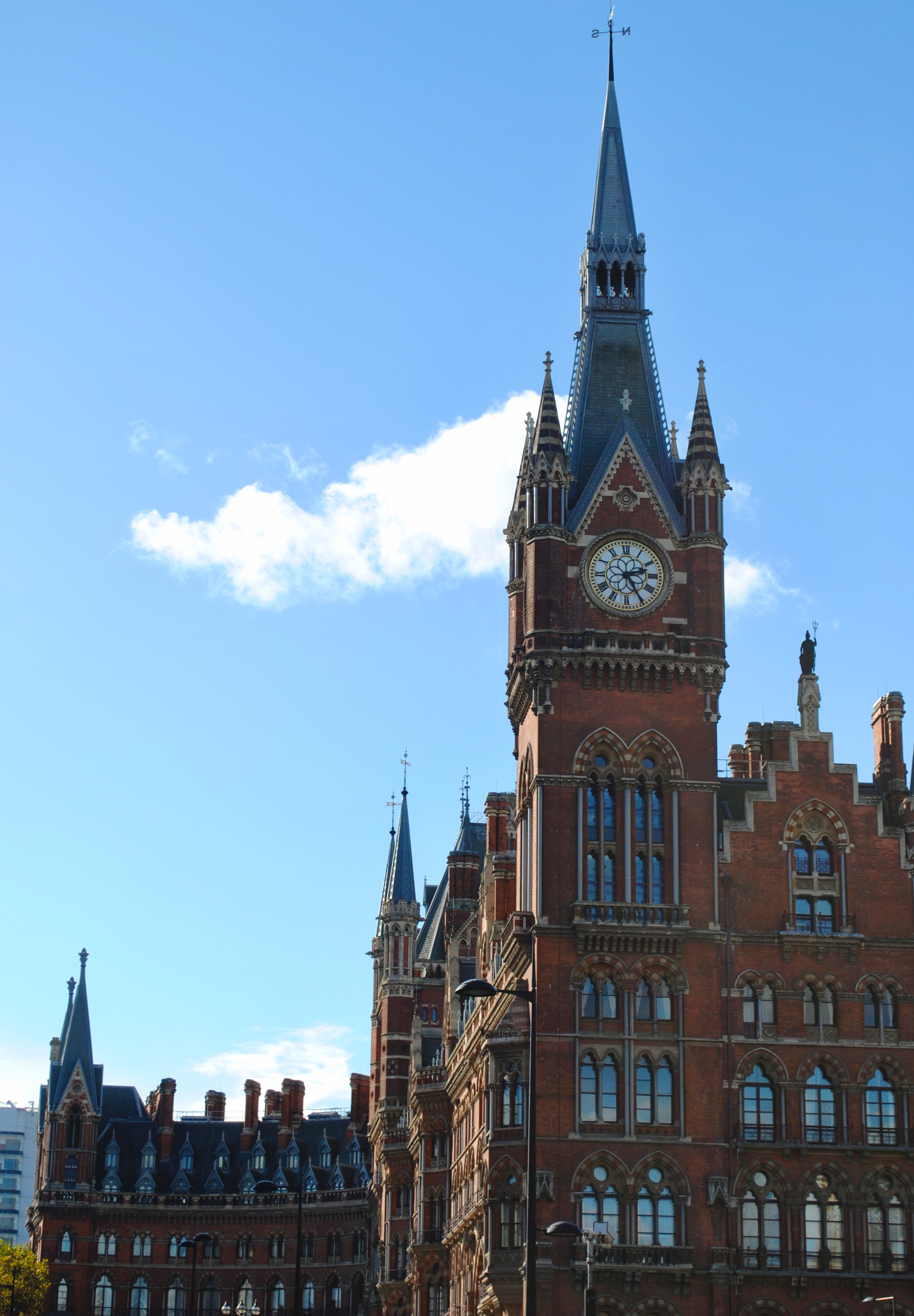 The Millennium Bridge makes an appearance in one of the darker scenes of the movie series. 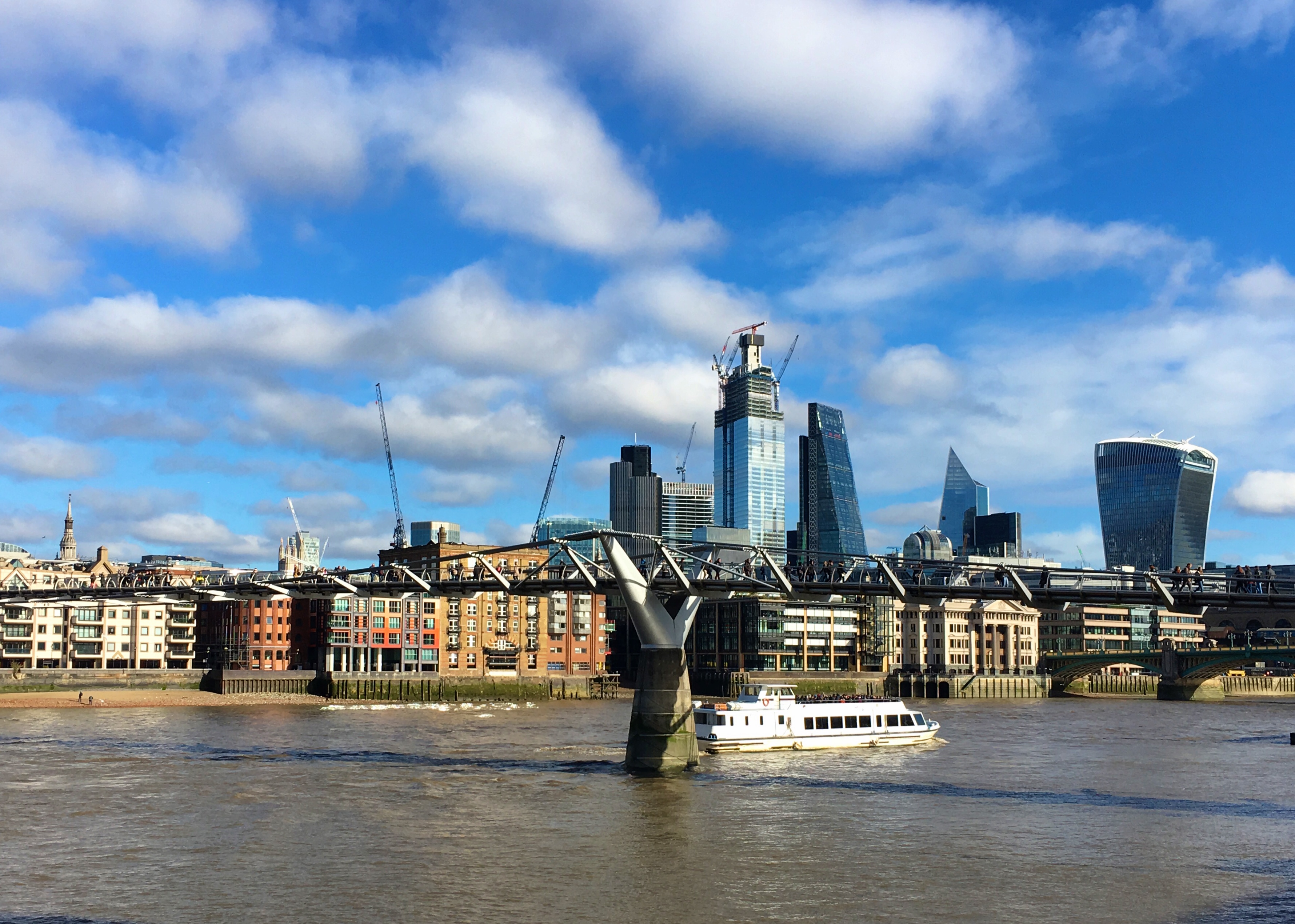 In Harry Potter and the Half Blood Prince, death eaters attack the bridge ripping it apart and sending the muggles to their demise in the water below. (Our experience crossing the bridge was a lot happier!) 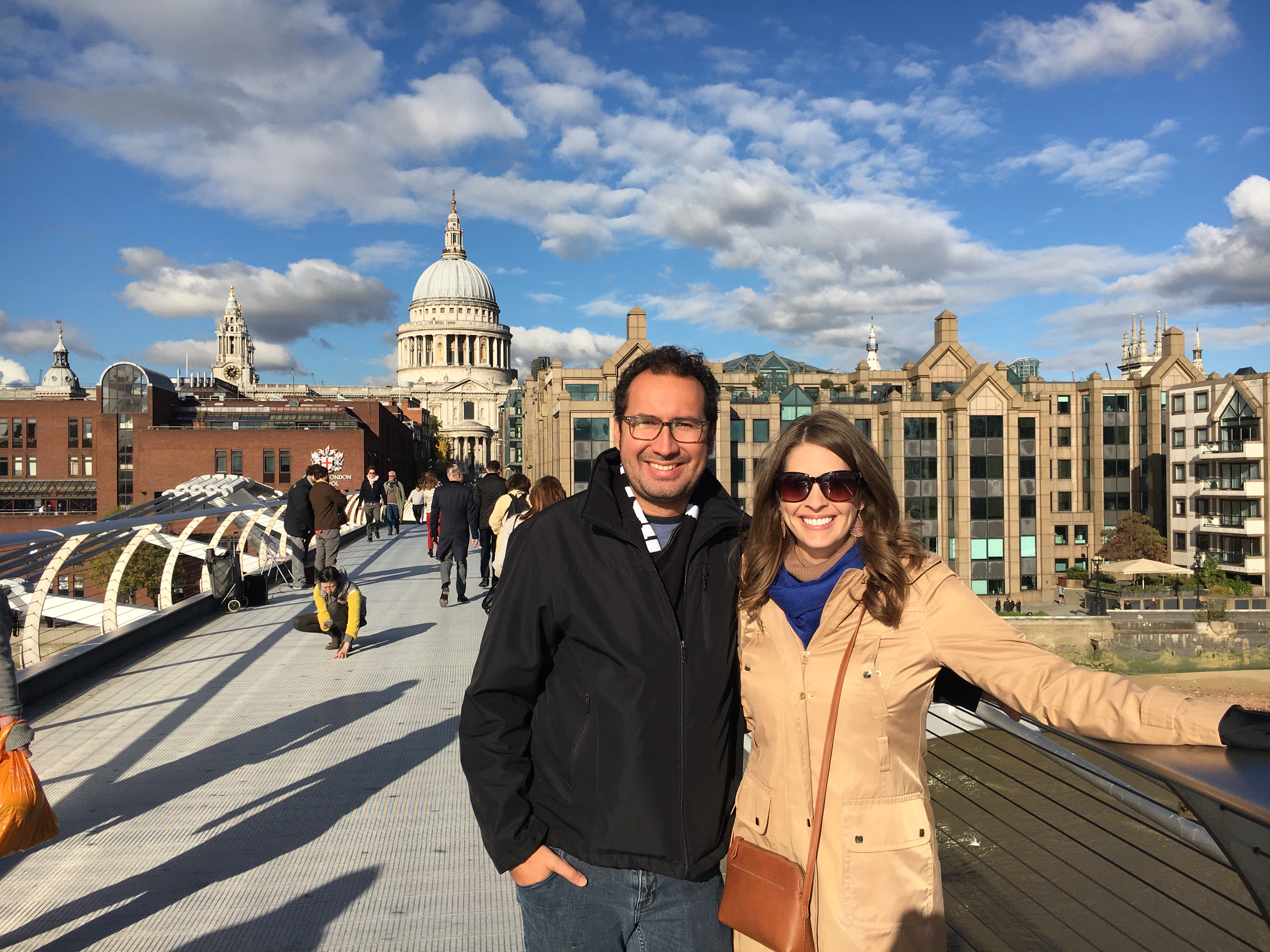 The Tower Bridge and several other attractions including the London Bridge and Houses of Parliament make a quick appearance in Harry Potter and the Order of the Phoenix. Members of the Order fly along the River Thames passing by these sites while safeguarding Harry to Number 12 Grimmauld Place. 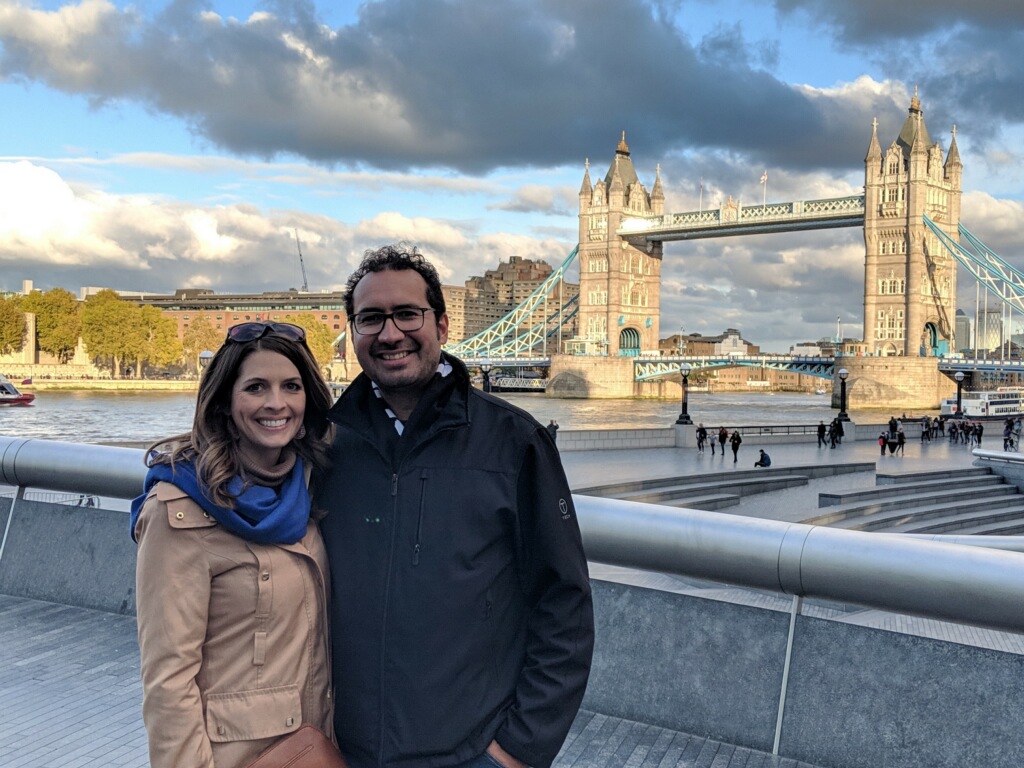 If you’re an HP fan, you’ll want to see Harry Potter and the Cursed Child at the Palace Theatre in London. (It’s also now playing in New York City, as well) 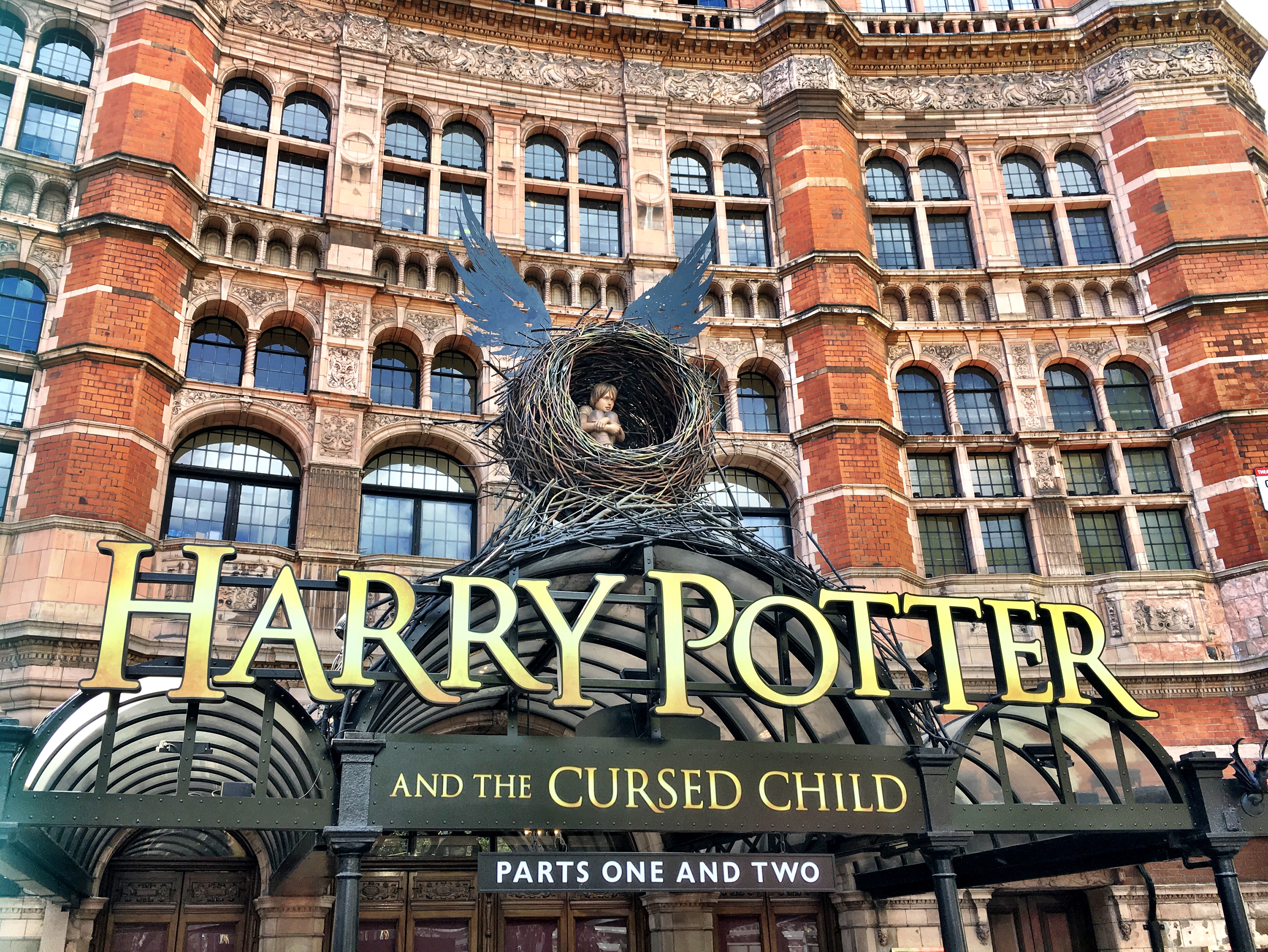 We saw the show while on our honeymoon in 2017 and were lucky enough to get chosen to move to the front row!! While the actual story itself isn’t our favorite, the theatrics are why you want to see this show. The special effects were stunning. If you love HP, the play will bring you right back to the world you love.

Some of the film scenes for Diagon Alley were shot in the famous Borough Market. Make sure you eat a lot of food while you’re here. (We especially loved the mulled cider, scotch eggs, and drunk cheese.) 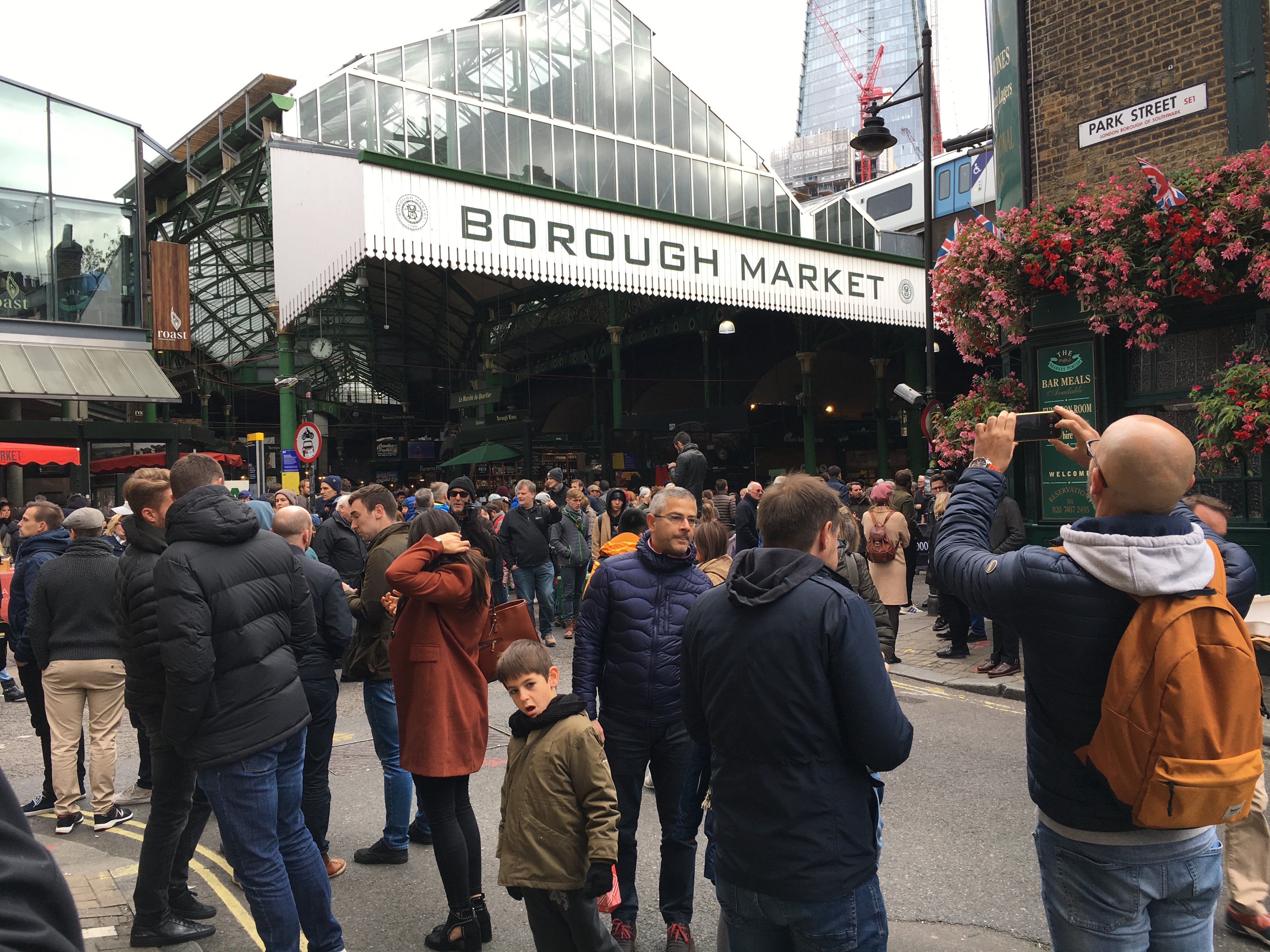 On the right side of the above photo, you can see the Market Porter Pub. In Harry Potter and the Prisoner of Azkaban, the Knight Bus goes under a bridge and then comes to a stop in front of the Third Hand Book Emporium. That scene was filmed right along the street in between the Borough Market and Market Porter Pub.

Other Harry Potter sites in London:

There are several other Harry Potter sites in London that any fan should see. 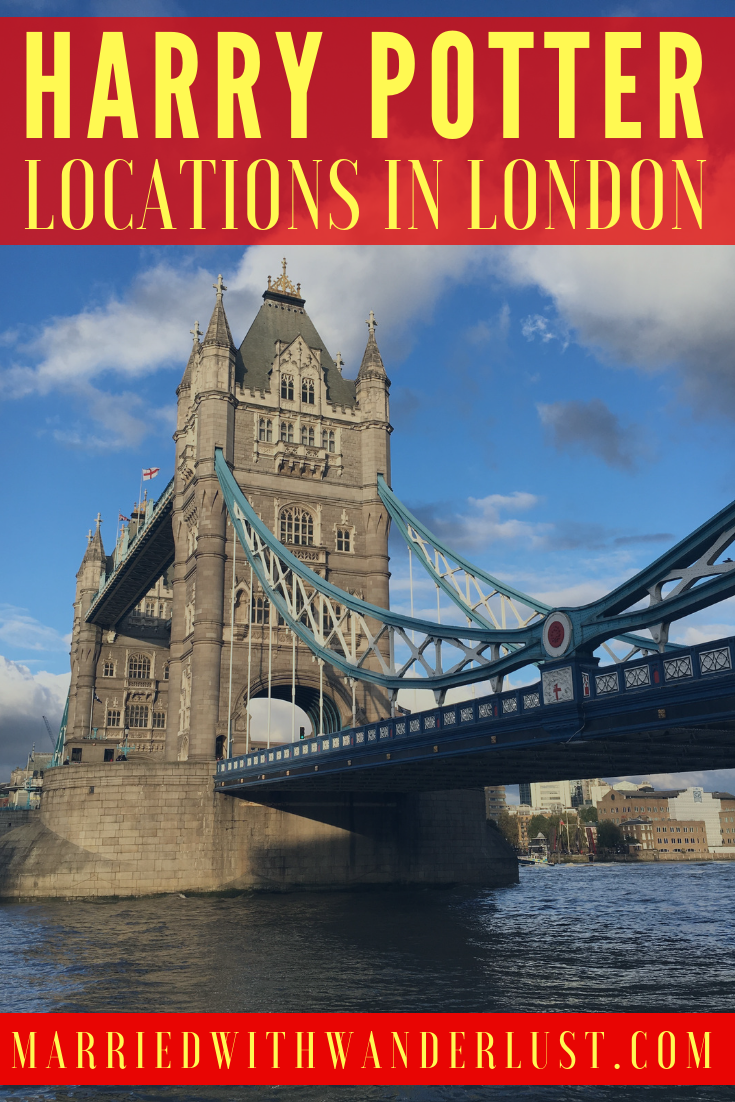