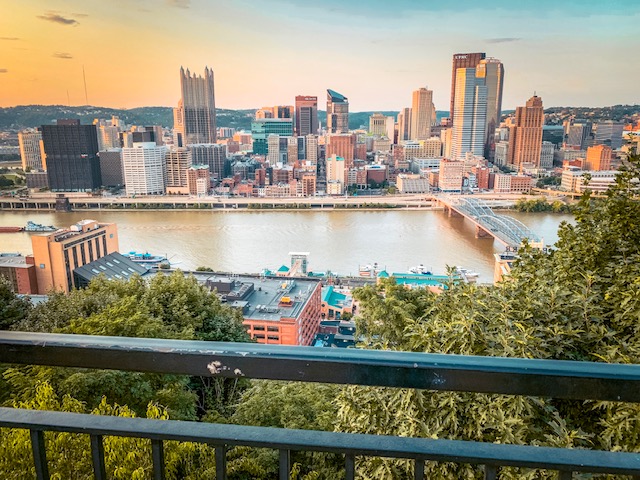 I recently visited Pittsburgh for the first time for a work conference and got to spend the evenings exploring the Steel City. Even though I grew up in the neighboring state of Maryland, I’ve surprisingly never been to Pittsburgh!

Here are some suggestions of the best things to do in Pittsburgh with only a few days:

Things to Do in Pittsburgh with Limited Time:

I love visiting Major League Baseball parks and PNC Park did not disappoint! From inside the stadium you get a great view of the skyline and one of the bridges (though you can’t see it from the angle of the photo above). There is a good selection of food and drink and everywhere we walked throughout the stadium seemed to provide good view of the field.

Wander the Carnegie Museum of Natural History and Art

The Carnegie Museum was my favorite stop in Pittsburgh and while the entire museum far-exceeded my expectations, I originally visited with only one exhibit in mind: T. rex. The Carnegie dinosaur is the holotype, which means it was the first discovered fossil of the species.

To my delight there were a lot of other dinosaur fossils to see including Triceratops, which always makes me recite the line, “three horns never play with long necks!” Come on, I know at least a few of you were Land Before Time fans (I still have my stuffed Little Foot from childhood!).

Besides the dinosaur section, the Carnegie Museum of Natural History also has exhibits on North American and African wildlife, gems and minerals, and more.

What I didn’t know until arriving is that admission into the Natural History Museum also gets you into the Carnegie Museum of Art! Among my favorite pieces on display were those by Claude Monet. However, I also really enjoyed several other Impressionist paintings including Paul Signac’s Place des Lices, St. Tropez and Edvard Munch’ Girl under Apple Tree.

The contemporary art in the Crossroads exhibition is also very powerful.

Ride the Monongahela or Duquesne Incline

There are two inclines in Pittsburgh that will get you to the top of Mount Washington and the view alone is worth it! You can choose between the Monongahela Incline and Duquesne Incline and each takes you to a different area on the mountain (both with restaurants and bars to choose from). We chose to ride the Duquesne and the options at the top are a little more hipster and a lot cheaper than the spots atop the Monongahela.

The cars on both inclines can fit approximately 24 people and the ride is fairly quick, about five minutes.

See the City from Mount Washington

Once you reach the top of the Incline, you’ll get a panoramic look at the city and river! Along with the amazing view, Mount Washington neighborhood has a variety of restaurants and bars.

Point of View Park, located at Grandview Avenue and Sweetbriar Street) is another popular spot and home to a sculpture of George Washington and Guyasuta, the leader of the Seneca people.

Another not-to-miss-spot in Pittsburgh, the Andy Warhol museum is a lot of fun! The museum is home to the largest collection of Warhol art and archives in the world. Some pieces you’ll recognize immediately like the iconic Campbell’s soup art shown above. Many others were totally new to me. Some of my favorites included: Skull, Untitled (Elephant), Portraits of the 70s, and the unique Silver Clouds installation.

Other Awesome Things to Do in Pittsburgh:

With only a few evenings to explore (I was in work meetings most of the day), I missed out on a lot in Pittsburgh. Here are some other great ideas for things to do in the Steel City: