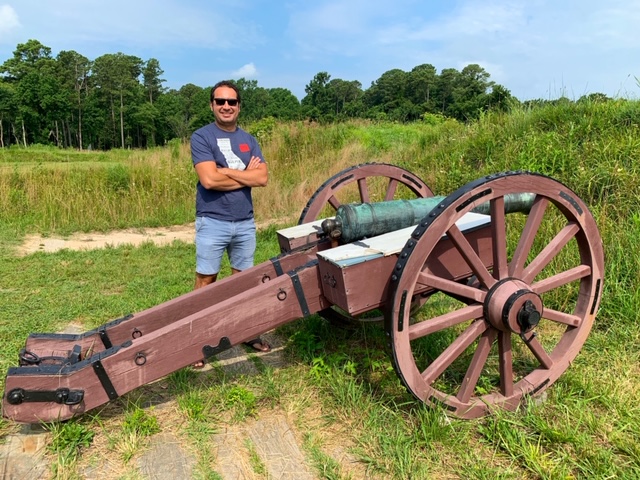 The last stop on our 3-day tour of Virginia’s Historic Triangle was Yorktown Battlefield. There was so much liveliness in Williamsburg and the Jamestown Settlement with actors in character all day long as militia, artisans, and Powhatan Indians. Yorktown Battlefield was quieter, giving us time to really reflect on the history of the American Revolutionary War.

There’s just something about standing in the spot where a war was fought hundreds of years earlier that really makes you be thankful for your freedom. We also happened to be visiting for Independence Day weekend!

While the Colonial National Historical Park does offer a museum and nearby monument, the majority of the experience is a driving tour around the key locations of the Battlefield. Here’s our experience and recommendations:

You’ll start your visit at the NPS Visitor Center where you’ll pay your small entrance fee ($10 per person) and get your map. It will definitely come in handy on the drive!

The visitor center also has a small museum with some interesting artifacts (a table that belonged to Lord Cornwallis, for example), and an interactive map that gives you the lay of the land. The video that goes with the interactive map does a great job of explaining the history, but for a little more detail you can attend the 16-minute movie, “Siege at Yorktown.”

You can purchase an audio tour at the gift shop before heading out if you’d like to hear the history while you drive.

Stops on the Yorktown Battlefield Tour

Now you’re ready to hit the road for the Battlefield Tour!

As with most attractions and sites, we recommend arriving early. The park opens at 9:00 am. and we had many of the tour stops all to ourselves at that time.

Following the road tour is so easy. If you know your alphabet from A to L, you’re all set! Haha! The visitor’s brochure provides information about each stop and a map, but really you’ll just keep your eye on the signs and you can’t go wrong.

The first stop of the tour is just outside the Visitor Center. This area is where Lord Cornwallis withdrew his troops after General George Washington and French Lieutenant General Rochaembeau’s Allied armies arrived.

A short walk from the parking area at stop C will give you a good look at what the siege lines looked like. This second siege line was built starting on October 11, 1871 but wasn’t completed because Redoubts 9 and 10 (the next stop on the tour) blocked the way to the river.

The home of Augustine Moore was one of our favorite stops on the tour. This is where, on October 18, 1781, representatives of Washington, Rochaembeau, and Cornwallis, met to negotiate the surrender terms for the British army.

Surrender Field is probably the most famous stop on the tour and the name gives away the reason. This is where, on October 19, 1781, Cornwallis’s army marched onto the field and surrendered thousands of men and artillery.

This stop ends the Yorktown Battlefield Tour but marks the beginning of the Allied Encampment Tour.

Stops on the Allied Encampment Tour

Stop G is not really a “stop.” You’ll be driving through a wooded area that once contained General Washington’s artillery, ammunition wagons, and more.

Stop H marks the area where General Washington had his headquarters. There is a placard with information but we didn’t get out to see if there was anything

Take a quiet moment to reflect on all the French soldiers that lost their lives helping us fight for independence. This cemetery is said to contain the remains of 50 unknown French soldiers.

Similar to the American Artillery Park, “stop” J is another drive-through area rather. This is where the French kept their heavy artillery.

This “stop” will take you on a long drive through the woods as you explore the area where the French troops were encamped. If you’re in a rush, you could skip this portion by veering to the right after the French Artillery Park when you come to a fork in the road.

To be honest, we hiked a little bit into the woods at this spot but couldn’t find exactly what we were supposed to be looking for!

The park is open from 9:00 am to 5:00 pm daily (closed only on Thanksgiving, Christmas and New Years Day). Visit the official National Park Service website for information on special events.