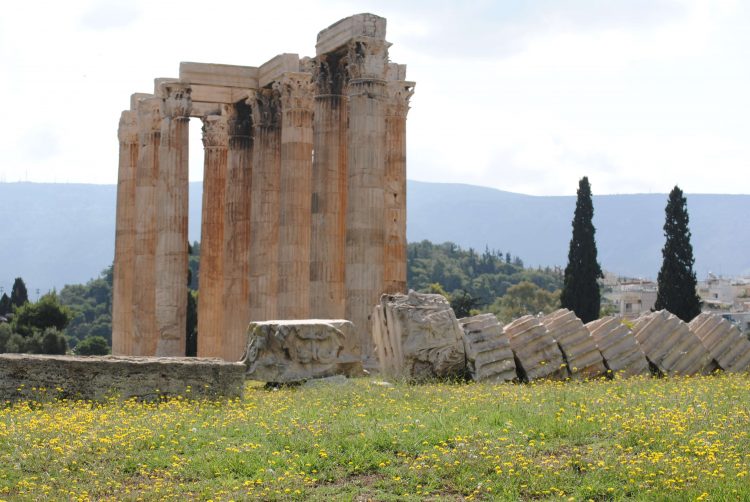 If you’re visiting Athens, the Acropolis is obviously on your “must-do” list. It truly is a travel bucket-list item you’ll be glad you checked off. While you can see the Acropolis from all over the city, seeing it up close is a whole different experience.

Admission to the Acropolis and its slopes is 20€, but we’d suggest paying 10 extra and purchasing the Athens Multi-Site Ticket. The Athens multi-site ticket includes admission to a lot of important ruins. Our group was able to see almost all of the sites in one day, but we were very busy! For a look at our Athens schedule, check out our post on 48 Hours in Athens.

This is what you came here for, right? Arrive EARLY. We mean when the gates open at 8:00 am. You won’t regret it, because by the time you’re leaving you will be overwhelmed by how many visitors are entering the site.

The Acropolis encompasses the entire site, but the Parthenon is the iconic temple that you see from all around the city. Make this your first photo opp for a picture with very few tourists in the background!

Along with the Parthenon, there are many other ruins to see at the Acropolis. Make sure you check out the Erectheion, the Temple of Athena Nike, the Odeon of Herodes Atticus, and more!

The Olympieion is more commonly referred to as the Temple of Olympian Zeus and this was one of our favorite stops. We headed here right after the Acropolis and it is a very quiet site early in the morning.

You might as well have some fun while you’re here, right?

Make sure you walk around the entire site, because you’ll want to see the fallen column. It looks especially pretty in early summer when the wildflowers are blooming.

The Ancient Agora is another not-to-miss site included in the Athens Multi-Site Ticket. This site includes the well-maintained Temple of Hephaestus.

Be on the lookout for turtles in this area! We spotted a couple.

You’ll also want to visit the Stoa of Attalos at the Ancient Agora, which houses a variety of Greek sculptures.

The Stoa of Attalos is a two-story structure and you’ll get a great view from the top!

The Roman Agora is located in the heart of Athens and is an easy walk from pretty much everywhere. According to the placard at the entrance, the Roman Agora was built between 19-11 BC and housed the commercial activities of Ancient Athens.

What we liked about this spot is how close you can get to the ruins.

There is also a small museum on the site and entrance is included with your ticket.

This is the only of the sites we visited that we would not have minded skipping. It is basically an archaeological site that used to one of the oldest gymnasia in the city.

While there is not much in the way of “ruins” to look at, this is a very peaceful spot. Grab a seat on a bench and take in the fragrance from the lavender bushes, while relaxing after a long morning of sightseeing!

Library of Hadrian and Kerameikos (and Museum)

We were not able to squeeze these last two sites into our one day of sightseeing in Athens.  We arrived about five minutes too close to closing time for the Library of Hadrian and it was no longer admitting visitors. Keep this in mind if you are running out of time and hoping to see any particular sites in Athens. The Library was built by Roman Emperor Hadrian and the ruins include one large wall and a few smaller structures and columns. You can see some of it and snap a few photos from outside the gate.

We never made it to the site of Kerameikos, but have read that it includes an ancient cemetery and some other ruins.