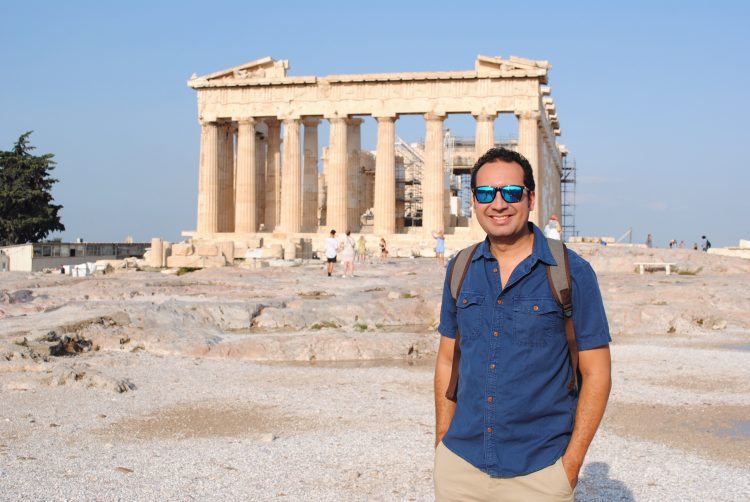 From the second you arrive in Athens, Greece and get your first glimpse at the Acropolis, we promise you will already be in love. At least we were. We stepped off the train and immediately saw the ruins towering above us in the distance, beckoning us to come explore.

Basic Information for Visiting the Acropolis:

The Acropolis was constructed in the fifth century BC and includes a variety of important historical buildings, the most famous of which is the Parthenon. It is open from 8:00 am to 5:00 pm.

Admission to the Acropolis and its slopes is 20€ (there is a discount during the off-season from November to March). We’d suggest paying 10 extra and purchasing the Athens Multi-Site Ticket (also reduced during off-season). This will get you into a variety of other historical sites throughout Athens and we felt it was well worth the money. There are also several free admission days and you can find them listed on the official website.

Our biggest piece of advice for the Acropolis is to arrive EARLY, as in at opening time at 8:00 am. We promise that within just an hour or so this site will be packed with other tourists. On days when there are cruise ships in port, the crowd will be even heavier!

What to See & Do at the Acropolis:

The Parthenon was dedicated to the Greek goddess Athena and is the most well-known of the buildings at the Acropolis.

You’ll want to snap some photos here as soon as you arrive at opening and you may just be able to get some with very few tourists in the background!

Along with a smaller crowd, another great thing about arriving at opening is being able to watch the guards march to the flagpole to raise the Greek flag.

The ceremony really is unique to experience from such a historic spot in the world.

While the Parthenon is obviously the most-famous temple at the Acropolis,
the Erechtheion may be the most stunning (in our opinion).

One side of the Erechtheion contains the “Porch of the Maidens,” six females that serve as columns.

Thousands of years after being constructed, it’s amazing to see how intact the design is on the columns.

The Temple of Athena Nike sits a little higher than some of the other temples at the Acropolis and you won’t be able to get as close of a look.

There is a lot of restoration underway at the Acropolis and you’ll see scaffolding around parts of the Parthenon and other buildings.

You’ll also notice a lot of artifacts in piles behind a rope fence. The artifacts are numbered and we can only assume this is how they keep track of everything on the site.

The Odeon of Herodes Atticus is another site you’ll want to check out while at the Acropolis. This ancient theater has been restored and now hosts musical events and shows throughout the year. If you’re lucky, there will be one while you’re in Athens! What an incredible experience that would be.

From the Parthenon, you’ll also get a view down the Acropolis slope at the Theatre of Dionysus. Not the be confused with the Odeon of Herodes Atticus, this theatre dates back to the sixth century BC and is not nearly as well-preserved.

Now that you’re prepared to see the Acropolis, here are a few other posts that may help with your Athens planning: